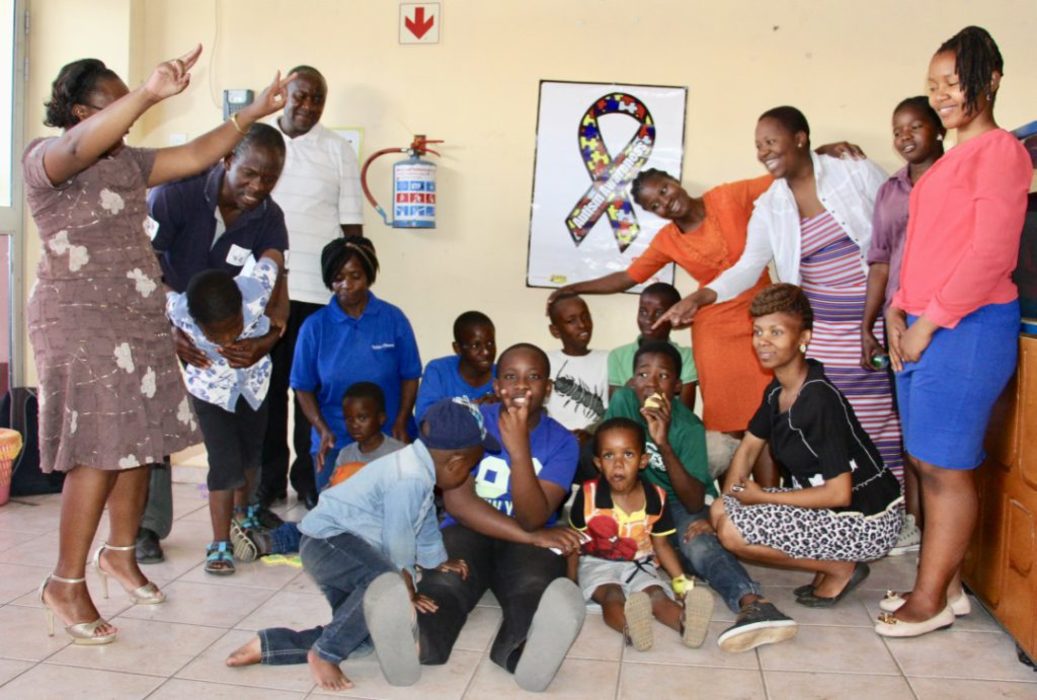 In honor of World Autism Awareness Day, we are thrilled to highlight how an organization half way around the world is raising international acceptance and support of Autism Spectrum Disorder (ASD).

Tryphinah Mvubu, Founding Director of Autism Swaziland, shares firsthand experience as a mother of child with autism, her challenges and triumphs, and how her son, Nick, 13, is the champion behind their organization, “Nick’s great improvement has been a source of inspiration to our family, his therapists and many - thus, he became the hero behind Autism Swaziland.”

Tell us how you have been personally touched by autism.

My journey with Autism Spectrum Disorder (ASD) started in 2007, when my boy, Nick, started early childhood education at the age of 4. At this stage, he could not formulate his own speech. He was hyperactive, had insomnia and was only sleeping 15 to 30 minutes at most since he was born. He exhibited many other characteristics of ASD some of which were seen from birth but I did not know at the time what it was.

Nick’s preschool teachers had sent many complaints and eventually instructed me to take him for assessment. They told me he is a “special child” but I did not know what that meant. Upon the first assessment, he was with diagnosed ADHD. They too repeated the term, “special child.” I then took him to the Psychiatric Hospital and he was put on Ritalin, which did not make any difference. It was after the Ritalin had failed that I heard the word “Autism” for the first time. An autism expert who had worked with children with ASD in the US diagnosed Nick with Asperger’s Syndrome. Nick started therapy with an Occupational Therapist and Language and Speech Therapist at Mbabane Government hospital.

Since Nick’s diagnosis, can you share with us the ups and downs? Success stories?

We did not miss his appointments with the therapists. We saw a huge difference. He could now see me in a picture and also recognize me in person, the same with all the other family members, but there were times when you could not be sure if he knew you. Nick started formulating his own speech when he was 9 years old and his coordination improved drastically. His therapists attributed this development to the drums he practiced with a passion from the age of two. He used kitchen utensils such as cake tins, bottles, pots and cutlery, and at times stones. Today he is one of the best in playing drums. He is invited to play even for weddings. He also taught other boys who are now playing in their churches. Nick has been able to make many friends and heroes through his skill for playing drums.

In terms of Nick’s education, his learning was not easy since we had to negotiate and educate each teacher about his condition. But he passed well, ranging from 75% up almost in all subjects. With computer and French he could score up to 100% at times.

Nick is now able to sit still and to sleep for many hours. When he was younger he did not want to be touched nor cuddled. But today he is very affectionate. He can now eat a variety of foods, though he still very choosey. He is also passionate about saving his own money to buy his own Samsung tablet. He likes gadgets and the Internet, as they help him see new drum players. He learns new styles from them which he immediately tries out in church. He plays soccer. He can wash his own clothes and dress himself properly.

Sometimes we deliberately miss his routine just to see his reaction - he can now cope. When his sister is away at university, all he needs to know is when she is leaving home and the month of her return. Around that time, he will begin asking about her. Generally, Nick can now cope with many changes. We have really come a long way with him.

What does the next chapter in Nick’s development look like?

Nick is now classified among highly functional individuals with ASD, he has good speech both in his first and second language. He still struggles though with abstract concepts, like words with double meaning, humor, idioms and social cues. He still does not know he has a condition since he does not understand it.

Nick is a teenager now and we, as a family, are struggling with addressing sexual reproductive health issues due to his concrete thinking and inability to understand some words.

Tell us about the level of autism awareness in Swaziland.

Living in a country where ASD is not known, Nick was often misunderstood as a spoiled brat. Some parents would even try to discipline him in my presence since I was considered failing to be a good parent. Being a church person, it was never easy to be in church with him. For many years, we would spend most of the time outside until he was allowed to sit on the drums.

Swaziland is still at an initial awareness stage in as far as issues of autism are concerned. Many people do not know nor understand autism and it is highly stigmatized. This includes the leadership, legislature, many in the health sector and the community at large, making it difficult for children and persons with ASD to access basic services. Thus some parents opt to hide their children from ridicule and they refuse to open up about this challenge.

There are three government hospitals that give therapeutic services to individuals with ASD namely, the Psychiatric Centre, Mbabane government and Mankayane hospital here in Swaziland. But these too, have a limitation in adequately providing therapeutic services to individuals with ASD. Yet autism is on the rise here. There are private service providers though few. They are expensive for the masses, many of which are counted among the almost 70 percent of the country’s population that lives below the poverty line.

The plight of individuals with Autism Spectrum Disorders in Swaziland and Africa cannot be over emphasized, the list is endless.

With firsthand experience, you saw a need for Autism Swaziland. What kind of support and services does your organization offer?

Autism Swaziland focuses on children and families affected by Autism Spectrum Disorders by giving support, rehabilitation, awareness, advocacy, protection as well as psychosocial support to their families. Thus bringing hope to children with ASD and their families.

How important is international awareness and acceptance of autism?

International awareness of autism is important in the sense that it helps Swaziland, though still at an awareness stage, to align with what the world is doing. For example, the theme for this year’s World Autism Awareness Day is, “Autonomy and Self Determination.” There is no autonomy without awareness, as it says, “I can make informed decisions about my life.”

International awareness will help us educate parents in what they need to know about ASD so that they can make informed decisions for their children. This will help them positively change the environment of the child. The parent’s knowledge will reduce stress for the family, thus reducing stressors for the individual with ASD. In our experience working with parents, many children drastically improve once the family knows and accepts the condition.

Tell us about your relationship with Milestones Autism Resources. How is Milestones helping you and your organization?

Milestones has helped my organization in so many ways - with invaluable tool kits, resource discs, and a brochure detailing how teachers and pupils can understand children with ASD at school and in class. These tool kits have gone a long way in helping our Program Enhancers, teachers and parents. There has been a positive impact on the children we frequently support.

Haley Dunn on the Milestones team is our Contact and Resources person and we are forever grateful to her, Karen J. Smith, our Autism Swaziland US contact, and the entire Milestones family. I can’t wait for the Conference and to meet all these great people in person!

What do you hope to gain from attending the Conference in June?

Milestones, through Karen Smith, has invited me to attend the 15th Annual Conference and I look forward to attending! As the Founding Director of Autism Swaziland, I hope to broaden my understanding of ASD issues from the enlightened input of the practitioners that will attend the conference.

I look forward to meeting like-minded professionals as myself and I am hoping to gain knowledge from others at the conference, through the workshops and shared experiences. I also hope to enlighten others about Autism Swaziland/Africa.

As a mother of a child with ASD, now approaching the teenage stage, I am eager to learn more approaches to issues of Sexual Reproductive Health (SRH) which is a major challenge among children with ASD and disability in general. With HIV/AIDS infection rate on the increase in Africa, especially among girls with ASD, I am also anxious to know how my country can develop an SRH program that will effectively address such issues.

My hope is to return to my country with new approaches to help better the lives of many people with ASD. I am also hoping that my country can be a learning Centre for many countries in Africa in the near future.

Straight from the Source - Reaching New Milestones with Music Therapy

Ask the Expert: Tips on Getting Your Child Ready for School